William-Adolphe Bouguereau (1825 – 1905) and James Tissot 1836 – 1902), French academic painters and Realists whose work earned high prices, each painted the subject of an elder sister holding a younger sibling several times during his career.

Bouguereau was born into a family of wine and olive oil merchants.  From the age of 21, he studied art at the École des Beaux-Arts in Bordeaux, where he won first prize in figure painting.  Bouguereau then went to Paris and became a student at the École des Beaux-Arts, and he won the coveted Prix de Rome at age 26 in 1850, enabling him to study for a year in Rome.  He was particularly impressed by Raphael’s work.  After his return to Paris, he exhibited at the Paris Salon for the rest of his career.  He married in 1856, had five children, and became famous and wealthy from his paintings of Classical, religious and mythological subjects, featuring images of idealized women and girls. 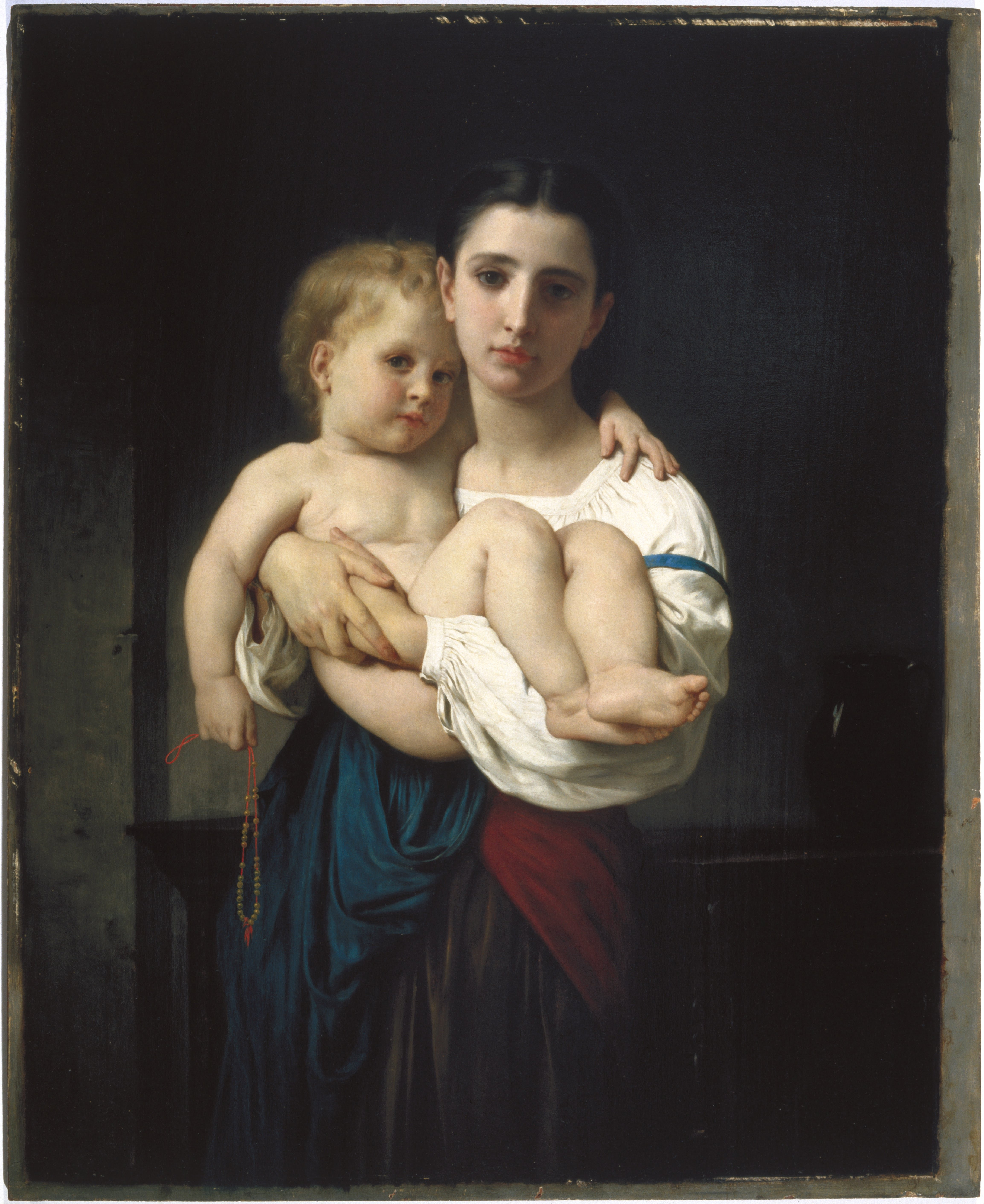 A réduction [reduction] called The Elder Sister (c. 1864) is in the permanent collection of the Brooklyn Museum in New York.  It is one of at least two known versions that Bouguereau painted after a larger subject displayed in the Paris Salon of 1867.  The influence of Bouguereau’s Classical training is evident in the pose of the Madonna and Child and the idealized, even monumental, figures. 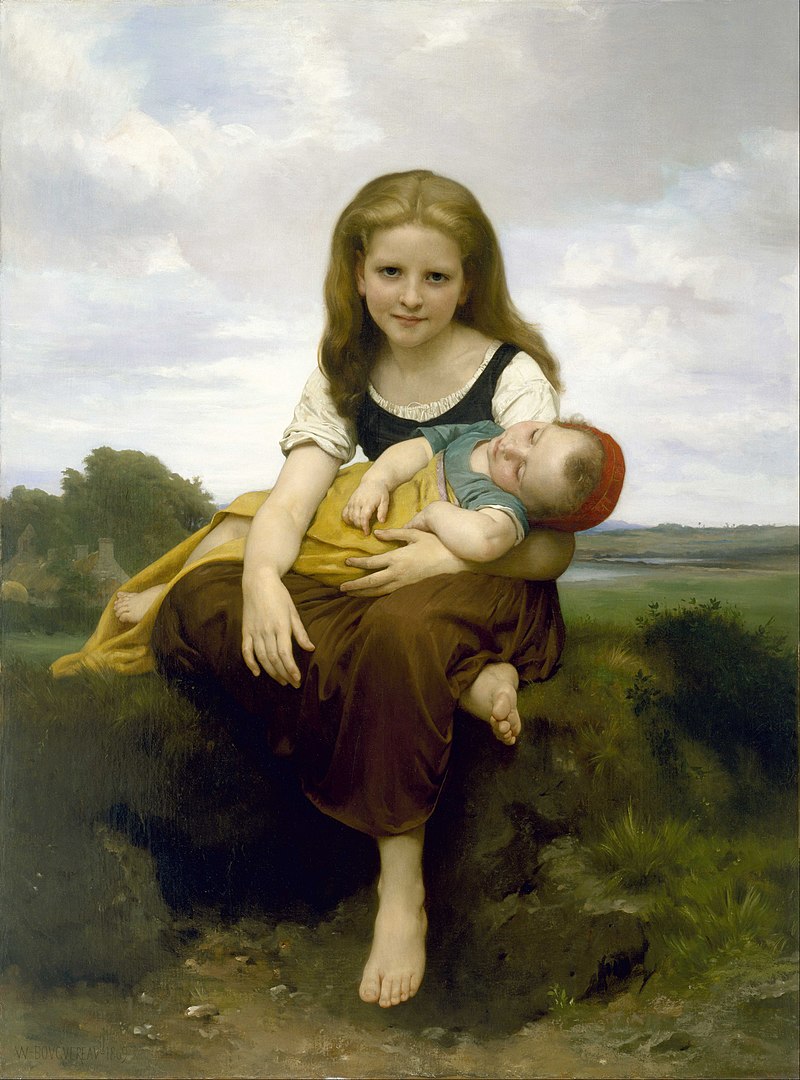 For another painting called The Elder Sister (1869), in the permanent collection of the Museum of Fine Arts, Houston, Bouguereau used his daughter, Henriette, and his son, Paul, as models.  His children are rendered as beautifully idealized types against a nearly Classical background.

Bouguereau painted yet another The Elder Sister [La soeur ainée] in 1886, and he painted two pictures called The Big Sister [La grande soeur] in 1865 and 1877; these versions and another, smaller The Big Sister all are in private collections.

James Tissot, eleven years younger than Bouguereau, was born to parents who were self-made, prosperous merchants and traders in the textile and fashion industry in Nantes, a bustling seaport on the banks of the Loire River, 35 miles from the Atlantic Ocean.  He left for Paris at 19, in 1856 (i.e before he turned 20 that October), and enrolled at the Académie des Beaux-Arts in 1857.  He began exhibiting his work in the Salon in 1859.  By the late 1860s, he was a successful painter living in an elegant new mansion.  However, he fled Paris in the aftermath of the Franco-Prussian War and the bloody Commune in mid-1871, and established himself in the competitive London art market.  By early 1873, he bought the lease on a two-storey Queen Anne-style villa at 17 (now 44), Grove End Road, St. John’s Wood.  In 1875, he built an extension with a studio and huge conservatory that doubled the size of his house.  In the conservatory, he grew exotic plants, while his garden was designed with a blend of English-style flower beds and plantings familiar to him from French parks.  The bay window of Tissot’s new studio overlooked this idyllic landscape, which he painted repeatedly, especially after he began sharing his home with his mistress and muse, Kathleen Newton (1854 – 1882) in 1876.

Among his other paintings at this time, Tissot used the same subject matter as Bouguereau – an elder sister holding a younger sibling.  Unlike Bouguereau, Tissot relied on the same models, Kathleen Newton and her niece, Lilian Hervey (1875–1952), in slightly different poses, with slightly different backgrounds, to create his series of paintings, all c. 1881.  Compared to Bouguereau’s images, Tissot’s are warm, spontaneous and contemporary – suited to his patrons collecting modern art.

By the late 1870s, James Tissot began to use photographs as the basis of some of his paintings.  He used a photograph of Kathleen Newton, sitting with Lilian Hervey on the steps from his conservatory into the garden, to create three oil paintings and a print, each titled La soeur ainée.  He displayed one of these paintings at the Dudley Gallery in London in 1882, in a one-man show he called “An Exhibition of Modern Art.”

In another, particularly gorgeous version of La sœur aînée (c. 1881, oil on panel, 15.98 by 7.01 in/40.6 by 17.8 cm), the stairs are covered by a straw mat.  The top half of this image shows the shining, highly reflective glass doors into Tissot’s conservatory.  [To see it, click here and scroll more than halfway down, looking to the right.]  This painting, which hangs in the palatial Nashville, Tennessee home of Marlene and Spencer Hays, was shown at the Musée Orsay in 2013 along with selections from the couple’s extensive collection of French art.  The Hays began collecting in the 1970s; this version of Tissot’s La soeur aînée was last sold at Sotheby’s, New York in 1987 for $ 135,000 USD/£ 87,690 GBP [Hammer price].  Mr. Hays is the Chief Executive Officer and President at publisher Athlon Sports Communications, Inc. and Executive Chairman of the Board at Southwestern, a company that recruits and trains college students to sell educational books, software, and website subscriptions door-to-door.

A third version of Tissot’s La soeur aînée (c. 1881) was bequeathed to the French nation by a private collector in 1919 and is now assigned to the Musée Orsay.  An oil on canvas, it is a more close-up view of Kathleen Newton and, at her knee, Lilian Hervey.  It also features the straw mat covering the steps from the conservatory to the garden, and is now known as Mère et enfant assis sur le perron d’une maison de champagne [Mother and child sitting on the porch of a country house].

The image of happy domesticity was popular enough that Tissot made an etching of it; his prints were immensely popular through 1886.  Notice the straw mat on the steps; the print is based on the version of Tissot’s oil painting now in the French national collection.

So, did James Tissot, referred to by a prominent acquaintance as “that plagiarist painter” in 1874, take the idea for paintings of The Elder Sister from Bouguereau, who painted the subject with success many years before he did?

Who can say?  But then, did Bouguereau take his inspiration for another, related, subject from one of James Tissot’s first successes?