French painter James Tissot’s success in England from 1871 to 1882 inspired at least one English artist:  John Atkinson Grimshaw.  Grimshaw, who like Tissot was born in 1836, now is best known for his glowing Victorian moonlight scenes. 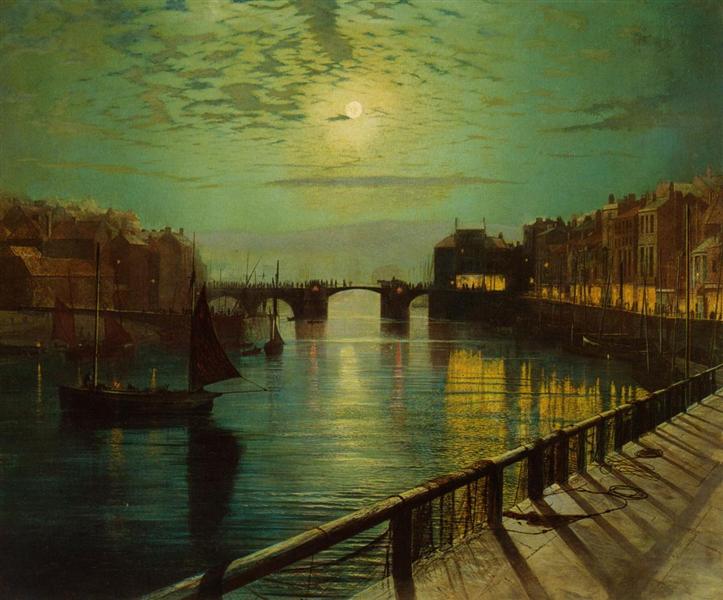 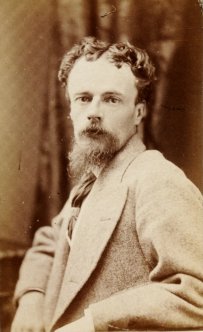 But self-taught, Grimshaw began with still lifes influenced by the Pre-Raphaelites, which he started exhibiting in his birthplace, the industrial city of Leeds, in the 1860s.  He had become a clerk at the Great Northern Railway at age 16, married in 1858 at age 22, and, after painting from nature in the parks and fields outside the city for a few years, began to sell his paintings in Leeds.  His work became popular in the area, and he gave up his job at age 25.  He began exhibiting his work in 1862, and in 1865, moved his growing family to Knostrop Hall, a Jacobean manor house [demolished in 1960] two miles east of Leeds Tissot on the Aire River.

By the 1870s, Grimshaw’s work was being promoted by London art dealer William Agnew.  He painted his first moonlight scene, Whitby Harbour by Moonlight, in 1867, but in search of new subjects to appeal to collectors as his reputation spread to the capital, he began imitating the work of other artists, including Dutch-born Lawrence Alma-Tadema (1836 –1912) and James Tissot, both of whom recently had emigrated to London and had found spectacular success.

Tissot’s Too Early was a sensation at the Royal Academy in 1873, and it was purchased and sold by William Agnew.  Grimshaw made his debut at the Royal Academy exhibition in 1874 with the acceptance of The Lady of the Lea, and around 1875, his paintings were exhibited regularly at Agnew’s prestigious galleries.  His work sold well, to the same type of wealthy industrialists who purchased Tissot’s paintings. 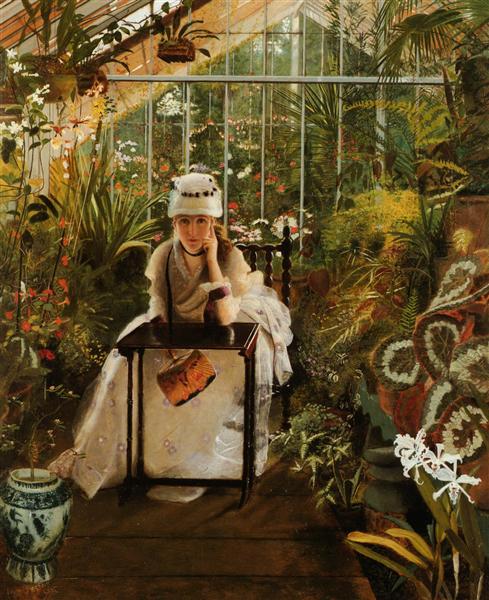 Here are some examples of Grimshaw’s paintings inspired by Tissot’s style, subject matter, composition, and in some cases, his palette.

Above left, The Japanese Scroll (c. 1874), by James Tissot; right, Spring (1875), by John Atkinson Grimshaw.  Grimshaw’s fashionable lady relaxes near a large window overlooking a serene private garden; as in Tissot’s picture, the elegant interior features the Oriental bric-à-brac so stylish during this period.

Above left, In an English Garden (1878), by James Tissot; right, In the Pleasaunce (1875), by John Atkinson Grimshaw.  Tissot’s scene was painted in his garden in St. John’s Wood, London, and Grimshaw’s was painted at “Ye Old Hall/Knostrop, Leeds.”  The compositions of both scenes rely on the well-dressed women as focal points in the elaborate settings.

Above, left, The Empress Eugénie and the Prince Impérial in the Grounds at Camden Place, Chislehurst (c. 1874), by James Tissot; right, Autumn Regrets (1882), by John Atkinson Grimshaw.  Grimshaw, taking a cue from Tissot, uses weather and the season to convey mood in his melancholy outdoor scene.

In 1876, at the height of his career, Grimshaw bought a second home, Castle-by-the-Sea, in the resort town of Scarborough, and he moved there with his family.  But three years later, when a friend reneged on a substantial loan, Grimshaw, as guarantor, found himself in debt.  The house in Scarborough was sold, the family returned to Knostrop Hall, and in 1880, Grimshaw rented a studio in Chelsea, London, where he could focus on his work and accelerate his production of pictures.

After Tissot’s young mistress died in 1882, and he immediately returned to Paris, Grimshaw was mainly painting the moonlight scenes that proved popular, and even were admired by James McNeill Whistler, who said, “I considered myself the inventor of nocturnes until I saw Grimmy’s moonlit pictures.”  Grimshaw died in 1893, known for his moonlit landscapes; Tissot died in 1902, famous at that time for his Bible illustrations.

What became of James Tissot and Alfred Stevens?