Why did you choose James Tissot as the subject of your novel?

First, Tissot has a great story that hasn’t been told.  Second, because he was close friends with James McNeill Whistler, Edgar Degas, Édouard Manet, Berthe Morisot and others, he is at the center of the birth of Impressionism and modern art.  His story is intertwined with so many others’.  The man did not have a boring friend; his wide acquaintance included Louise Jopling, John Everett Millais, Lawrence Alma-Tadema, Tommy Bowles (who founded the British Vanity Fair magazine), Society novelist Ouida (author of A Dog of Flanders, 1872), and the German-born composer Julius Benedict, who conducted the Monday Popular Concerts in London.

How much of THE HAMMOCK is fact?

I endeavored to incorporate every biographical fact about James Tissot that is known.  Of the letters Degas wrote him, several have survived, but Tissot’s replies have been lost.  There is an envelope covered front and back with handwritten notes which have been attributed to Tissot, giving specific advice to Degas on how to improve one of his paintings, Interior (also known as The Rape; oil on canvas, Philadelphia Museum of Art), painted in 1868–1869.  There are a few contemporary accounts of Tissot’s whereabouts on certain days, comments on his personality or things he said and did, and a January 29, 1871 New York Times article on the bravery of the artists’ brigade, which mentioned Tissot had sustained a wound in battle.  I connected the dots, interpolating Tissot’s actions, attitudes and whereabouts within the factual framework, and then I filled in the gaps with what is known about his friends and colleagues.  Contemporary maps and guidebooks furnished facts of the neighborhoods of Paris, London and Venice that Tissot would have visited.  Where my research turned up conflicting accounts of people or events, I relied on my accumulated information and my intuition to choose the most likely option.  Should any reader have additional facts regarding any aspect of my story – I wish he or she had been at my side during my painstaking months of preparation.  Better yet if anyone can produce unpublished letters by Tissot or his friends telling us all what really happened to him!

I have attempted to present all the many characters accurately on each date they are depicted, showing where they were and interweaving their career progression and personal life with Tissot’s.  I spent months researching the individuals I portrayed, including their faces and dress, personalities and motivations, attitudes and wit.

As much as possible, dialogue and situations are drawn from the individual’s own words, in their letters or autobiographies, or from those of a contemporary.  My aim was to let the characters speak for themselves and to blend imagined dialogue for a seamless recreation of these fascinating individuals playing off each other as they might have in life.

A few characters had to be relocated to appear in a scene.  The essence of the characters and the timeline was preserved, to bring these people to life in the most accurate context of an extraordinary decade.

What’s the greatest fictional liberty you took in THE HAMMOCK?

Henri Regnault was killed in the Battle of Buzenval [in which James Tissot’s unit also fought], on January 19, 1871, not in the Battle of Malmaison on October 21, 1870 as in the novel.  I included him in my opening chapter to show the caliber of the artists fighting to defend Paris.  You can see Regnault’s gorgeous painting of 1870, Salomé, at the Metropolitan Museum of Art, NY.  Regnault was said to be “the future of art.”

Lourens Tadema, the Dutch painter who restyled himself Lawrence Alma-Tadema, actually left Paris with his small daughters and his sister at the outbreak of the Franco-Prussian War, arriving in London at the beginning of September, 1870.  In my novel, I kept him in Paris through Christmas, 1870, so I could introduce him in the second chapter.

No one knows what James Tissot did during the Paris Commune from March to May 28, 1871.  I believe he was drawn into it by circumstances (events unfolded virtually at the doorstep of his new suburban villa) and by the passions stirred up by the ordeal that Parisians had suffered.  And since Tissot was a follower of Gustave Courbet’s Realism, I wrote Courbet, who was formally inducted into the Paris Commune on April 16, 1871 and plotted to bring down the Vendôme Column, into the novel.

No one knows exactly when Tissot arrived in London, just that he had only the clothes on his back and a hundred francs in his pocket.  But my research turned up a fascinating, previously unknown detail:  a dated painting by Tissot proving he was in Paris through at least May 29, 1871, during the Bloody Week when the new French government suppressed the Paris Commune.  It is a spontaneous depiction of horror and brutality.

At any rate, according to James Tissot: Victorian Life/Modern Love, by Nancy Rose Marshall and Malcolm Warner (1999, Yale University Press ), “In 1874, Tissot seems to have been officially cleared of any association with the Commune, and from that point on he occasionally returned to Paris for short trips.”  In the novel, I depict Tissot returning to Paris in 1874 to clear his name as well as to visit Degas – who urges him to exhibit with the independent painters who would come to be called “Impressionists.”   Tissot declined.

Why did you begin the novel with three rather violent chapters?

We can’t understand what happened to Tissot in London – how his career unwound – unless we’ve walked with him during those dark, starving days of his participation in the Franco-Prussian War and its bloody aftermath.  To paraphrase Dorothea Brooke, the heroine of George Eliot’s Victorian masterpiece, Middlemarch, you would have to feel with him, else you would never know.  None of his choices in London makes sense unless you understand what he suffered prior to fleeing his life in Paris.

Who is your favorite character?

How could I choose?  I love them all equally.  I did develop a certain soft spot for the “Sunday artist” Joe Jopling (1831-1884), a decent if mediocre man whose biggest achievements were winning the Queen’s Prize at the Rifle Range at Wimbledon in 1861 with a bulls-eye, being a devoted, self-effacing friend to Millais and others, and accepting, in his forties, the fairly bold proposal of the lovely, widowed and brunette painter, Louise Romer, despite his declaration that “Widows are the very devil, along with dark-haired women and lady artists.”

Louise Jopling became the family breadwinner, and managed to build them a house in Chelsea – with his-and-her painting studios in separate wings.  I had created a picture in my mind of Joe as a small, thin man, rather unlikable – and then I read Louise Jopling’s 1925 autobiography.  It includes a photograph of them with their infant son, and Joe was a white-haired, unassuming, doting, portly old gent.  Just an old bachelor who lucked out late in life. 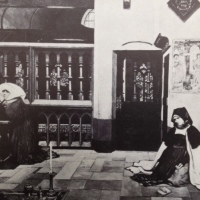 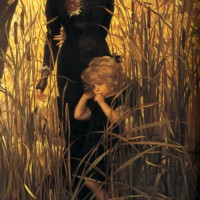 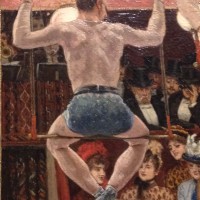