Note:  This is the second part of an earlier post, James Tissot and Alfred Stevens

To cite this article: Paquette, Lucy. What became of James Tissot and Alfred Stevens? The Hammock. https://thehammocknovel.wordpress.com/2015/11/18/what-became-of-james-tissot-and-alfred-stevens/. <Date viewed.>

They were so successful that the painter Henri Fantin-Latour warned James Whistler that Stevens and Tissot would imitate his Symphony in White No. 3 (1865-67), sent to Paris in 1867.

After his success at the Exposition Universelle in Paris in 1867, when Stevens exhibited eighteen paintings, he was promoted to Officer of the Legion d’honneur.  According to Berthe Morisot, he was earning about 100,000 francs a year.  He had moved several times, always to a more luxurious home.

In late 1867 or early 1868, Tissot moved into the splendid new villa he had built near the recreational grounds at the Bois de Bologne, at the west end of the chic avenue de l’Impératrice [now avenue Foch].

But abruptly, everything changed.  On July 15, 1870, Napoléon III, Emperor of the French, heeding his advisors in a diplomatic quarrel regarding the succession to the Spanish throne, declared war on Prussia – and its well-equipped and impeccably-trained army.

Because there were not enough French troops, a National Guard – a hastily-organized, inexperienced militia protecting Paris – was forming to defend Paris.  Every able-bodied Frenchman enlisted.  The volunteers were mostly assigned tasks such as standing guard at the city walls or public buildings.

Stevens, the son of a former officer under France’s first Empire, was a Belgian citizen but asked the Mayor of France to join the National Guard, saying, “I have been in Paris for twenty years, I married a Parisian, my children were born in Paris, my talent, if I have it, I owe it largely to France.”  Now 47, he was assigned to a unit which did not see much action.

On Friday, September 9, James Tissot was among the squads drilling along the avenue de l’Impératrice (near his sumptuous, three-year-old villa).  [Tissot scholar Willard E. Misfeldt learned that James Tissot actually had enlisted in the Garde Nationale de la Seine, the Fourth Company of the Eighteenth Battalion, in 1855 – as soon as he had arrived in Paris at age 19.].

On September 19, 200,000 Prussian troops encircled Paris in attempt to starve the French into submission.  By October 22, James Tissot was armed and fighting on the front line – as well as saving lives as a Red Cross stretcher-bearer.

In the months following the Franco-Prussian War and its bloody aftermath, the Paris Commune, Stevens convinced art dealer Paul Durand-Ruel to purchase over twenty canvases by Edouard Manet, one of his many friends.

James Tissot moved to London and rebuilt his career.  By 1873, he was living in a large house in St. John’s Wood, and in 1875, he built an extension with an elegant studio.  That fall, he traveled to Venice with Edouard Manet and his wife, Suzanne, and he bought Manet’s The Grand Canal, Venice (Blue Venice, 1875).

Tissot did not marry, but from 1876, his young mistress lived with him.  When she died of tuberculosis in November, 1882, Tissot left her two children by one or more previous relationships and moved back to Paris, where he attempted to reclaim his earlier renown.

Upon Manet’s death in 1883, the pallbearers at his funeral included Stevens, Zola, Proust, Duret, Fantin-Latour and Monet, but not James Tissot.  Stevens helped to organize Manet’s memorial exhibition a year later.

Stevens, who had married Marie Blanc, a wealthy Parisian, in 1858 and had four children (two of whom also became painters), continued to live extravagantly in Paris.  There he was discovered by several prominent American collectors, including railway mogul William Henry Vanderbilt (1821 – 1885), Baltimore liquor wholesaler William T. Walters (1820 – 1894), and New York sugar refiner Theodore A. Havemeyer (1839–1897).

Around 1875, Stevens moved into a sumptuous 18th century residence at 65, rue des Martyrs, near Place Pigalle, with a large English garden.  Stevens’ studio was styled to resemble a large Japanese cabinet, with walls of dull gold, black and gold lacquered doors, gilded furniture, and a Japanese shrine.  Over the embroidered, white silk window-shades hung gold brocade draperies, the floors were covered in Oriental carpets, and the windows overlooked a large English garden.  He collected antiques, Old Masters paintings, and Japanese prints and objets d’art including kimonos, parasols, fans, screens and porcelains.

Stevens received writers, painters, musicians and theater people, and he frequented the Café Tortoni and the Café Riche.  He started a private atelier which drew wealthy students including Sarah Bernhardt [and incidentally, it is thought that they were lovers].  In 1878, Stevens was promoted to Commander of the Legion of Honor and received another first-class medal at the Salon.

In 1880, railroad manager William Kissam Vanderbilt (1849 – 1920) visited Stevens’s studio, saw Le salon du peintre (1880), and bought it on the spot for 50,000 francs.  But that year, Stevens was dispossessed as a result of road work during urbanization; he was paid 300,000 francs, and a nearby passage was named rue Alfred Stevens.  That year, he was diagnosed with chronic bronchitis, and his doctor advised him to spend summers at the seaside.  Stevens went to Sainte-Adresse in Normandy, and art dealer Georges Petit offered him a contract for 50, 000 francs a year for three years, for his entire output of marine paintings.  This was a stroke of fortune that helped Stevens fund his trips.  Flirting with Impressionism, he made oil sketches of the sea and the coast under changing weather conditions.

During Tissot’s eleven years in London, he had declined Edgar Degas’ invitation to show his work with the artists who became known as the Impressionists.  Now back in Paris, he exerted himself to re-establish his reputation with a series of fifteen large-scale pictures called La Femme à Paris (The Parisian Woman).  Painted between 1883 and 1885, they portrayed the fashionable parisienne in various incarnations using brighter, modern colors than he had in his previous work. 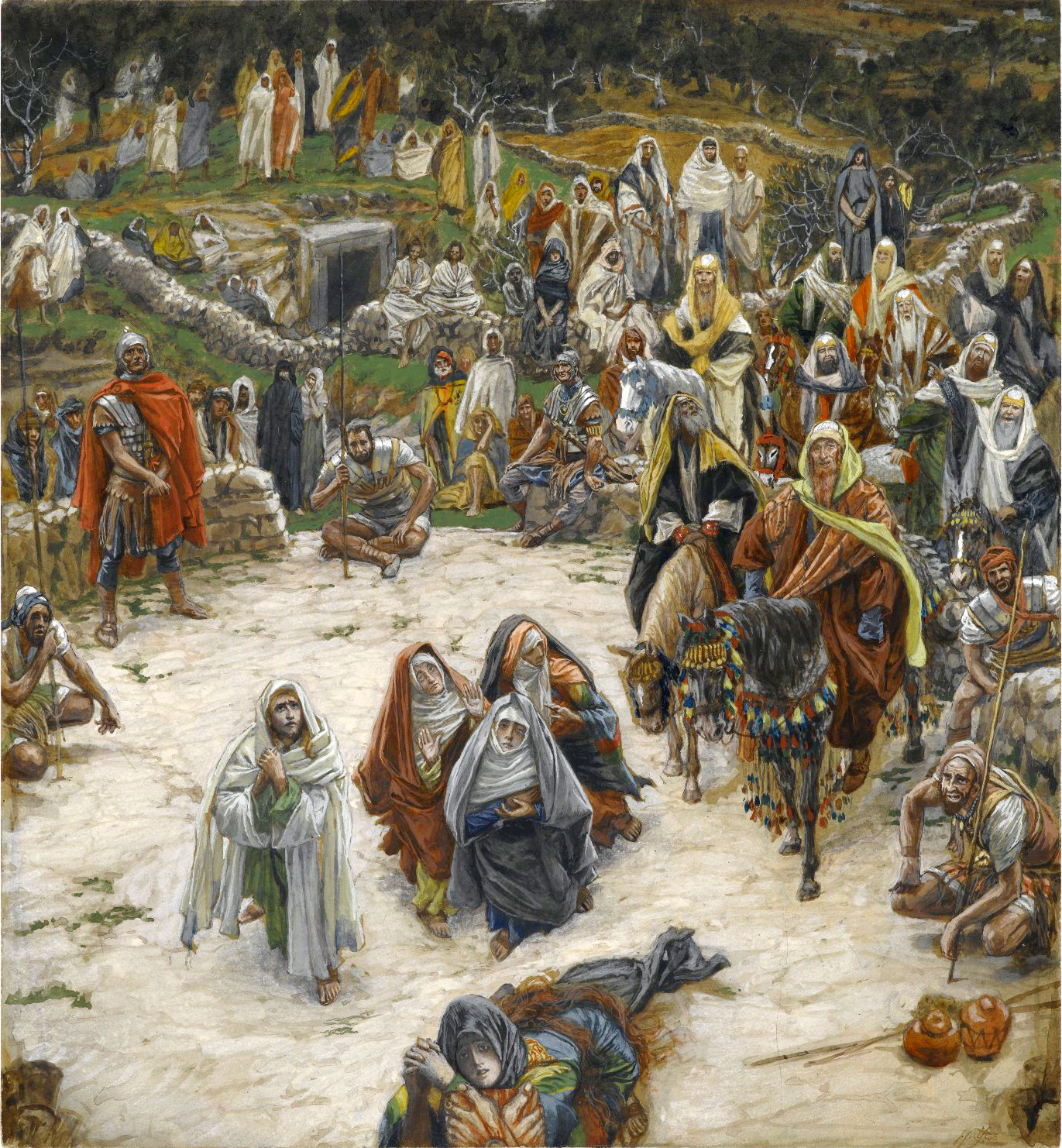 What Our Lord Saw From the Cross, by James Tissot. Brooklyn Museum, New York. (Photo: Wikimedia.org).

The project ended in 1885 with Tissot’s ambition to illustrate the Bible.  He traveled to the Holy Land that year, and again in 1889 and 1896, to make detailed drawings and notes of locations and details, taking photographs as well.  He produced 365 illustrations for the New Testament, of which 270 were exhibited at the Salon du Champ-de-Mars in 1894, causing women to fall to their knees with reverence and sob.  The illustrations were shown in London in 1896, again in Paris in 1897, and in America in 1898, when they raised over $100,000 in entrance fees and were purchased for $60,000 by the Brooklyn Museum.  The Life of our Lord Jesus Christ, illustrated by James Tissot, was published in France in 1896-97 and later in England and America.  Tissot was paid one million francs for the reproduction rights.  He still owned his house in Paris, and lived with style there and at the château near Besançon, France, that he had inherited upon his father’s death in 1888.  He spent increasing time there, working on illustrations of the Old Testament; English painter Louise Jopling (1843 – 1933) expressed the belief in her 1925 autobiography that Tissot had joined a Trappist monastery in Rome.

In 1886, Stevens published Impressions sur la peinture, (Impressions on Painting) which later was published in English and American editions.

But he also was involved in a greater work.

In 1883, painter Henri Gervex (1852 – 1929, perhaps best known for his 1878 painting, Rolla) conceived an idea for a joint project with Alfred Stevens for the Paris World Fair of 1889:  a grand panorama to be called History of the Century 1789-1889.  It would depict over 660 life-size figures of significant French men and women from one hundred years of French history between the Revolution to the present.  With a team of fifteen assistants that included Stevens’ son, Léopold, the resulting painting was 20 meters (65 ft.) high and had a circumference of 120 meters (nearly 400 ft.).  It was exhibited in a specially constructed rotunda in the Tuileries Gardens.

The History of the Century (detail), 1889, by Alfred Stevens, Henri Gervex, and a team of assistants. (Photo: http://www.the-athenaeum.org)

After the Exposition, the rotunda was pulled down.  No permanent installation could be found for the painting due to its size, and it was cut into 65 sections and distributed among various locations.  Only two-thirds of the sections have been preserved.  In addition to the photographs and twelve heliogravures from 1889 that captured the complete panorama, Stevens made four small sketches representing the whole panorama (Royal Museums of Fine Arts of Belgium, Brussels) [also signed by Gervex for the sake of courtesy].

His younger brother, Arthur, died in 1890, his wife, Marie, died in 1891, and his older brother, Joseph, in 1892.  In 1895, Stevens returned to Brussels with the intention of settling there, but when he applied for the vacant position of Director of the Brussels Academy, he was rejected.   In 1896, he returned to Paris and a year later, in need of money, tried to sell his replicas of the Panorama.

After an accidental fall at age 76, in 1899, Stevens was paralyzed and confined to a wheelchair for the rest of his life.  He lived in a few rooms in the avenue Trudaine, near Place d’Anvers.  He had four works in the Exposition Universelle in Paris In 1900.  Greatly respected and beloved by his peers, he also was given a special tribute with a retrospective at the École des Beaux-Arts in Paris, where he exhibited 205 pictures.  [Incidentally, there has not been an exhibition of Stevens’ work in Paris since this date.]  Stevens was the first living painter accorded this honor, and he also was the only living artist represented at the Retrospective Exposition of Belgian Art in Brussels, with thirty-one paintings.  [Click here for an image of Alfred Stevens from 1900.]

Ninety-five of James Tissot’s Old Testament illustrations were exhibited at the Salon du Champ-de-Mars in 1901, the last time his work was exhibited in Paris.  He died at age 65 the following summer after catching a chill outdoors at his château, and his illustrations toured America.  They were later purchased by the New York Public Library and passed to the Jewish Museum.

After a lifetime devoted to art, from which he had earned immense wealth, a sale of the effects from Tissot’s studio in 1903 resulted in the dispersal of his pictures and prints at very low prices.  Following the death of his elderly niece, the contents of the decrepit château near Besançon were auctioned off in November, 1964.

After Alfred Stevens’ death in 1906 at the age of 83, his obituary in a Boston newspaper extolled his genius and observed, “He was king of the boulevard in his day.”

James Tissot and Alfred Stevens, virtually forgotten for decades after their deaths, now are known for their entrancing images of the opulence of Paris life under the Second Empire.

“It all comes down to the degree of life and passion that an artist manages to put into his figure.  So long as they really live, a figure of a lady by Alfred Stevens, say, or some Tissots are also really magnificent.”

“Hurling towards the abyss”: The Second Empire, 1869