Not every man that Tissot painted was an exemplar of high style; he depicted a whole cast of supporting players to his aristocrats, military figures, and fashionable males.

The elderly male servant in Still on Top (c. 1874) wears a red liberty cap, a revolutionary symbol in France.  Tissot painted this scene only three years after he had fled Paris – under some suspicion – during the French government’s suppression of the radical Paris Commune.  It was a daring picture for an apparent French political refugee of the time, remaking his career in England.  One has to wonder if many English servants of the day wore this style cap – or if its appearance in this work is a painterly conceit of Tissot’s.  The man’s ensemble seems contrived to blend with the flags before him – his red shirt, blue long-sleeved sweater, and white canvas coveralls.  And yet, because Tissot’s habit was faithfully to record the fashions of the time, we can infer the essential accuracy of the type of clothes this man would wear – i.e. the coveralls and the black leather boots with a medium heel.

These hardy men wear what we now call Henley shirts – a collarless, pullover shirt with a placket, the traditional uniform of rowers in the town of Henley-on-Thames.  Their caps have black, blue and white stripes.  Both the shirts and the trousers would have been cotton at this time.

The cricketers in Holyday (c. 1876), in their black, red, and gold caps, are members of the famous I Zingari cricket club (which still exists, and is one of the oldest amateur cricket clubs), which played at Lord’s Cricket Ground near Tissot’s house at 17 Grove End Road, St John’s Wood, London.  Incidentally, the cap colors are based on the motto, “Out of darkness, through fire, into light,” and the gold is always at the top.  The men wear buff-colored lounge suits – sack coats paired with trousers cut from the same fabric, considered a casual look.  The young man reclining by the ornamental pool has a red carnation boutonnière, and a large ivory-colored scarf loosely knotted at the neck of his white shirt.  He wears tan and white laced spectator shoes with a low heel, just like the ones worn by the men Tissot painted in The Return from the Boating Trip (1873) and Quarreling (c. 1874-75) [see Masculine Fashion, by James Tissot: The Casual Male (1871 – 1878)].

In The Warrior’s Daughter (A Convalescent, c. 1878, the servant pushing the wealthy, ailing gent in the bath chair is, in classic supporting player fashion, dressed to recede behind the painting’s stars.  The servant’s rumpled brown coat, waistcoat, and trousers are relieved only by a white-spotted black scarf at his throat, and his unusually high-crowned brown hat with its wide maroon band halfway up.  Also somewhat incongruous is the high polish on his black leather shoes.

The elegant manservant in the background of The Letter (c. 1878) wears livery of a black morning coat over a white shirt with a high, stand-up collar and a white tie.  His tight black knee breeches blend into his black stockings and black leather shoes, which have no heels – surely allowing discreet attendance. In The Ferry (. 1879), Tissot contrasts the middle-class gentleman with the ferryman.  The passenger is hunched under an umbrella in his black bowler hat, black sack coat, pristine white shirt with a stand-up collar, and a tie, kid gloves and trousers in a matching light brown hue, along with black leather shoes and white spats.  The supremely capable ferryman steers with glove-less hands and stays warm in his heavy black wool pea coat and dark woolen trousers.  He has a natty white-and-black checked scarf at his throat and a Russian fur ushanka hat with the flaps tied up.  Incidentally, Tissot’s subversive streak is evident in this painting, as few painters of the time depicted members of the middle-class as less competent than an individual below them on the social scale.

The setting for Women of Paris: The Circus Lover (also known as Les femmes de sport, 1885) is the Molier Circus in Paris, a “high-life circus” in which the amateur performers were members of the aristocracy.  The man on the trapeze wearing red is the Duc de la Rochefoucauld, one of the oldest titles of the French nobility; he was said to have “the biceps of Hercules.”  Both the Duc and the man on the other trapeze wear flesh-colored leotards covering their chests, arms and legs, with brightly-colored athletic costumes, black leather belts, and colorful, laced leather athletic shoes without heels.

People of beauty and fashion attended the circus and mingled with the performers during the interval; note that the men in the audience wear gleaming silk top hats and morning coats over white shirts with stand-up collars.

Tissot’s work depicts the dress of a broad array of characters in the drama of his era, providing us with a window into his world.

By the 1870s, fashions for Victorian men were transitioning toward styles familiar to us today.  The ubiquitous, long and skirted black frock coat, and the morning coat (cut away to feature tails only), while still very much de rigueur for business, gradually were being supplanted by trendy styles.  The sack coat (a loosely-cut, thigh-length coat with no waist seam) and the lounge suit (in which the sack coat and trousers were cut from the same fabric), would become the men’s business suit of our modern age.   Ankle boots and laced shoes had been replacing full boots since 1850.  And in this decade, the straw boater hat was adopted by rowing enthusiasts for summer – as depicted by Impressionist painters in France.

The elegant gentlemen of the 1870s incorporated the latest styles in dressing for leisure time, and Tissot captured these trends in his paintings. 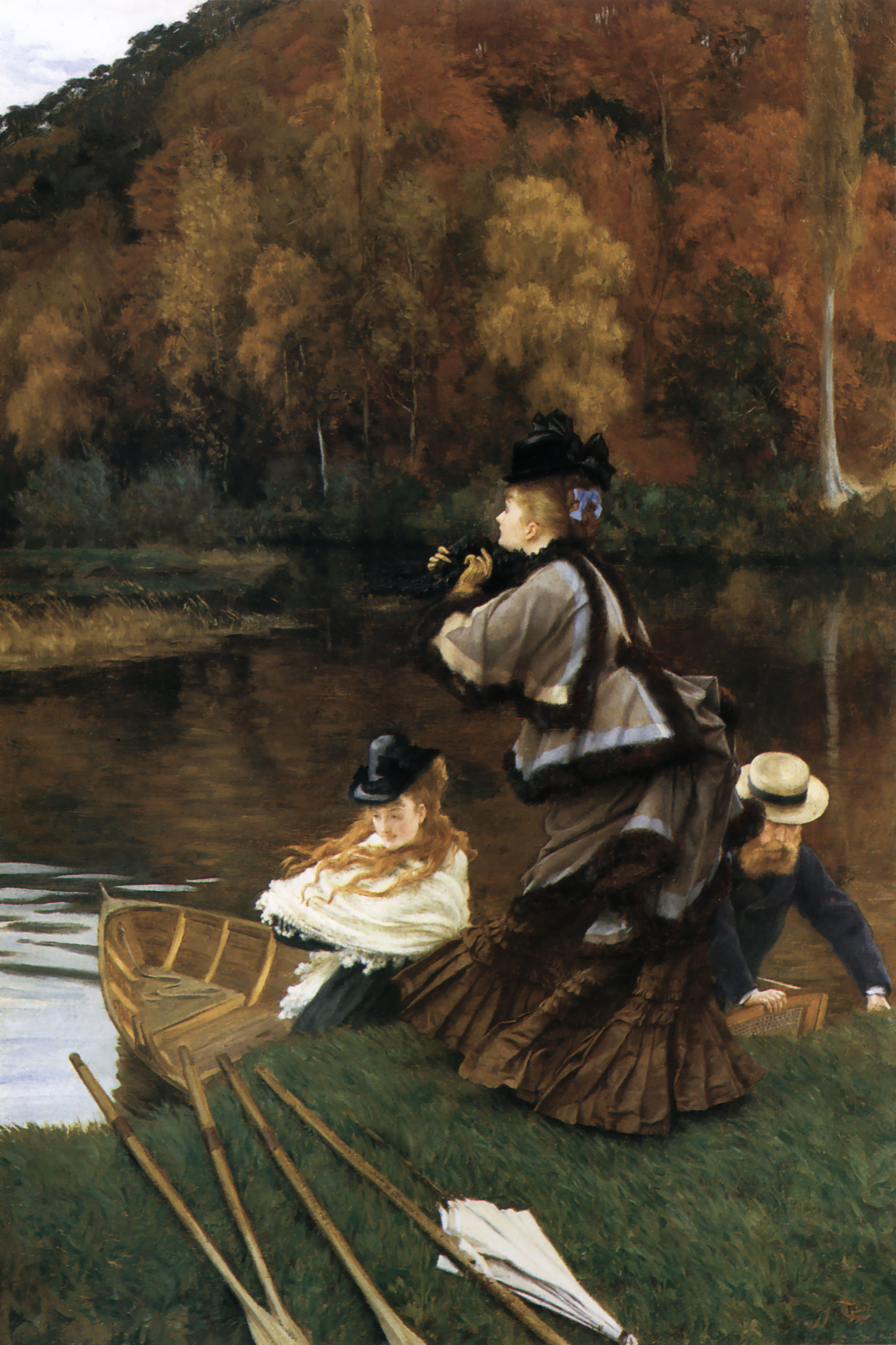 In Autumn on the Thames, Nuneham Courtney (c. 1871-72), the gentleman’s suit coat is deep blue, and we can see from his cuffs that he wears a crisp white shirt under it, accented with a black tie.  His straw boater seems slightly crumpled, but his ginger whiskers are so immaculately groomed as to be impervious to the strong breeze.

The Return from the Boating Trip (1873), by James Tissot. Private Collection. (Photo: Wikipaintings.org)

The dapper gentleman in The Return from the Boating Trip (1873), with his notable ginger whiskers and walrus mustache, is prepared for varying weather.  He wears a short, loosely fitted, double-breasted charcoal grey coat – really, a sailor’s pea coat – and carries a black overcoat on his arm.  Under the pea coat, the hem of a blue sack coat is apparent.  The man’s bright white trousers have a generous, loosely turned-up cuff, and they show off his summery laced-up spectator shoes of white and tan leather.  The white scarf neatly folded at his neck echoes his trousers, and under the scarf, his blue- and white-striped Breton shirt is visible.  His ivory-colored straw boater has a bright blue and red ribbon band.  He, like his companion, is dressed to perfection for this outing.

The unapologetic young man in Quarreling (c. 1874-75) wears a loosely-cut beige lounge suit that nicely sets off his flamboyant tan and white leather spectator shoes.  His white shirt collar is quite high, drawing the eye to his straw boater with its black band.  It was in the 1870s that it became acceptable to wear the lounge suit outside one’s domestic environment.

The young man in A Passing Storm (c. 1876), also shown after a quarrel with a woman, seems troubled, with his straw boater pushed back off his forehead.  He looks elegant in his black lounge suit, under which he wears a white shirt with a stand-up collar paired with a dark brown tie, and a low cut, ivory-colored waistcoat with a shawl collar.

And, finally, in By the Thames at Richmond (c. 1878), a fashion “Don’t”:  hunched over in his misshapen brown hat, wrinkled brown suit, and over-sized white spats covering his dusty black leather shoes, this man hardly cuts a striking figure.

However, the smart gentleman reader will note that the woman he is with gazes at him in adoration nonetheless – as he writes “I love you” with his walking stick in the ground at her feet.

Clothes are not always the measure of a man!