All prices listed are for general reader interest only, and are shown in this order:    $ (USD)/£ (GBP).  All prices listed are Hammer Price (the winning bid amount) unless noted as Premium, indicating that the figure quoted includes the Buyer’s Premium of an additional percentage charged by the auction house, as well as taxes.

Sometimes described as an Impressionist, James Tissot actually was a realist painter.  In fact he declined his friend Edgar Degas’ invitation in 1874 to exhibit his work with a loose group of French painters who would become known as Impressionists.

Tissot had moved to London in June, 1871, in the aftermath of the bloody Paris Commune following the Franco-Prussian War.  He rebuilt his lucrative career in England.

Degas wrote to him there, “Look here, my dear Tissot, no hesitations, no escape.  You positively must exhibit at the Boulevard.  It will do you good, you (for it is a means of showing yourself in Paris from which people said you were running away) and us too.”  But Tissot felt no need to identify himself with these struggling artists.

While his skillfully rendered atmospheric conditions accentuated, or added ambiguity, to his subject matter, he relied on studio models and photographs.

Tissot and his friend Edouard Manet traveled to Venice together in the fall of 1874, and Tissot bought Manet’s The Grand Canal, Venice (Blue Venice) on March 24, 1875 for 2,500 francs.  Manet badly needed the income.  Tissot hung the painting in his home in St. John’s Wood, London, and did his best to interest English dealers in Manet’s work, though the effect of shimmering water created by Manet’s quick, broken brushstrokes was quite different from Tissot’s style.

Tissot did not experiment with painting en plein air until after the mid-1870s, even then using landscape almost exclusively as a background for his narrative paintings.  His most “Impressionistic” painting was A Civic Procession Descending Ludgate Hill, London (c. 1879).  [See James Tissot’s “A Civic Procession” (c. 1879).]

How puzzling, then, that Tissot would have painted the panoramic Henley Regatta, 1877.  The view is from the bridge at Henley-on-Thames, Oxfordshire, looking downstream with the town on the left and the Leander Club on the right.

Founded in 1818, the Leander Club is the most prestigious and successful rowing club in the world; the Henley Royal Regatta first took place in 1839, and the first Clubhouse was built in 1897, a short walk from the finishing line.  The Regatta remains a defining event of the English social season, now comprising nearly 300 races over five days.

Henley Regatta seemed to be Tissot’s only plein-air landscape, and his brushwork at its most free and fluid.  Was it merely an experiment with the new painting style popular with his friends in Paris?  Did Tissot then abandon this type of work due to a lack of market for it in England?

On the painting’s stretcher, Tissot inscribed the painting to the woman who apparently commissioned it, Mrs. Gebhard.  By 1933, it belonged to N.C. Beechman, then Mrs. Emily Beechman by 1934.  It was acquired by Walter Hutchinson, National Gallery of British Sports and Pastimes, by 1949.  In 1951, it was sold at Christie’s, London for 900 guineas to the Leander Club.

Until the 1980s, scholars included Henley Regatta in catalogues of Tissot’s work, and it was last exhibited as a Tissot in London, Manchester and Paris in 1985.

In his 1986 book, Tissot, Victorian art expert Christopher Wood (1941 – 2009) commented that this painting was “so untypical of Tissot’s output that its authenticity, though well documented, has been questioned by some.”  Indeed, not only were the style and subject matter quite different from Tissot’s, but the picture lacked Tissot’s signature.

After about 1986, Henley Regatta no longer was in the possession of the Leander Club.  In 2013, the picture was sold at Christie’s, London – credited to American painter Frederick Vezin (1859 – 1933).  Born in Philadelphia, Vezin studied at the Düsseldorf Art Academy in Germany from 1876 until 1883.  Christie’s notes that by 1884, Vezin was exhibiting at the Royal Academy and the Grosvenor Gallery in London, and he exhibited in Liverpool and Manchester in 1885.

In 1897, Vezin’s uncle, an American actor living in London, wrote to English stage actor Sir Henry Irving that his nephew had a painting of Henley Regatta he wished to sell.  Irving and Tissot were friends, and Tissot, who owned many works by other artists such as Degas, Manet and Pissarro, must have either purchased it from Vezin or later from Irving.

Here’s an interesting work by Vezin, an etching of a port that is quite reminiscent of Tissot’s work, such as On the Thames (1876): 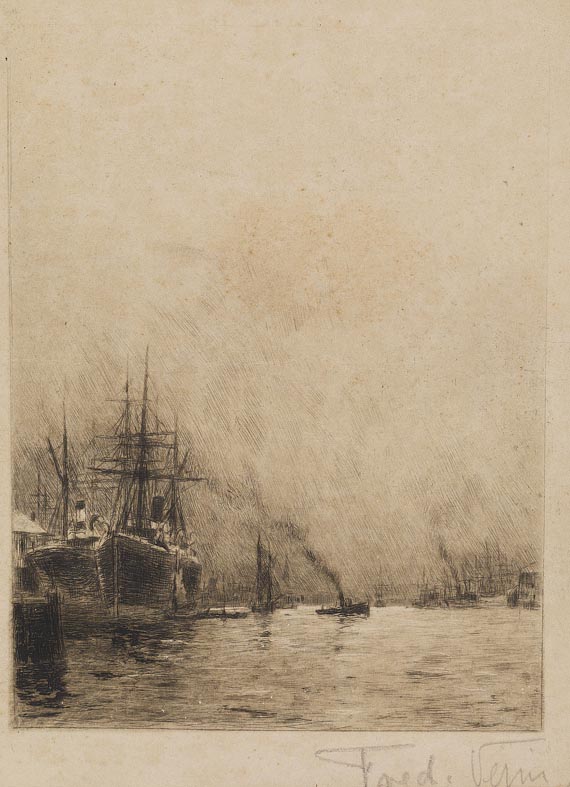 Tissot did paint some small oil studies of landscapes in a loose style for the background of other, finished works.

Disembarking from HMS Victory (also called The Hull of a Battle Ship), was offered for sale at Christie’s, South Kensington in June, 2014, but failed to find a buyer at that time.

And, of course, Tissot did paint rowers at Henley – in his distinctive way.

James Tissot the Collector: His works by Degas, Manet & Pissarro