Finally, there is a major exhibition of James Tissot’s work in Italy.

As of January, 2015, there were ninety-one oil paintings by James Tissot in public art collections worldwide:  twenty-six in the U.K., two in the Republic of Ireland, twenty-three in France, one in Belgium, one in Switzerland, twenty-six in the continental U.S. and one in Puerto Rico, six in Canada, one in India, two in New Zealand, and two in Australia.  Many of these pictures are not usually on display, and opportunities to see them in other locations are rare.

The most recent retrospective of James Tissot’s work in North America, and the only one since the first in 1968 (in Rhode Island and Toronto), was James Tissot:  Victorian Life/Modern Love, an exhibition that began at the Yale Center for British Art, New Haven, Connecticut, in 1999, and then traveled to the Musée du Québec, Canada, and the Albright-Knox Gallery, Buffalo, New York.  The exhibition featured approximately forty paintings, forty prints and twenty watercolors selected from public and private collections in North America, Europe and Australia, including works from the Tate Gallery in London, the Musée d’Orsay in Paris and the National Gallery of Art in Washington, D.C.

In 1984, the Barbican Art Gallery’s major exhibition, James Tissot, 1836-1902, curated by Krystyna Matyjaszkiewicz, included 185 works.  It travelled from London to the Whitworth Art Gallery in Manchester and the Musée du Petit Palais in Paris.

An exhibition at the Palace of Marra in Barletta, Italy in 2006, De Nittis and Tissot:  Painters of modern life, included loans of some of Tissot’s oil paintings by museums including the Tate and the Musée d’Orsay but focused more on his friend Giuseppe De Nittis (1846 –1884), following the donation of 172 of De Nittis’ paintings, pastels and engravings by Leontine Gruvelle in Barletta. 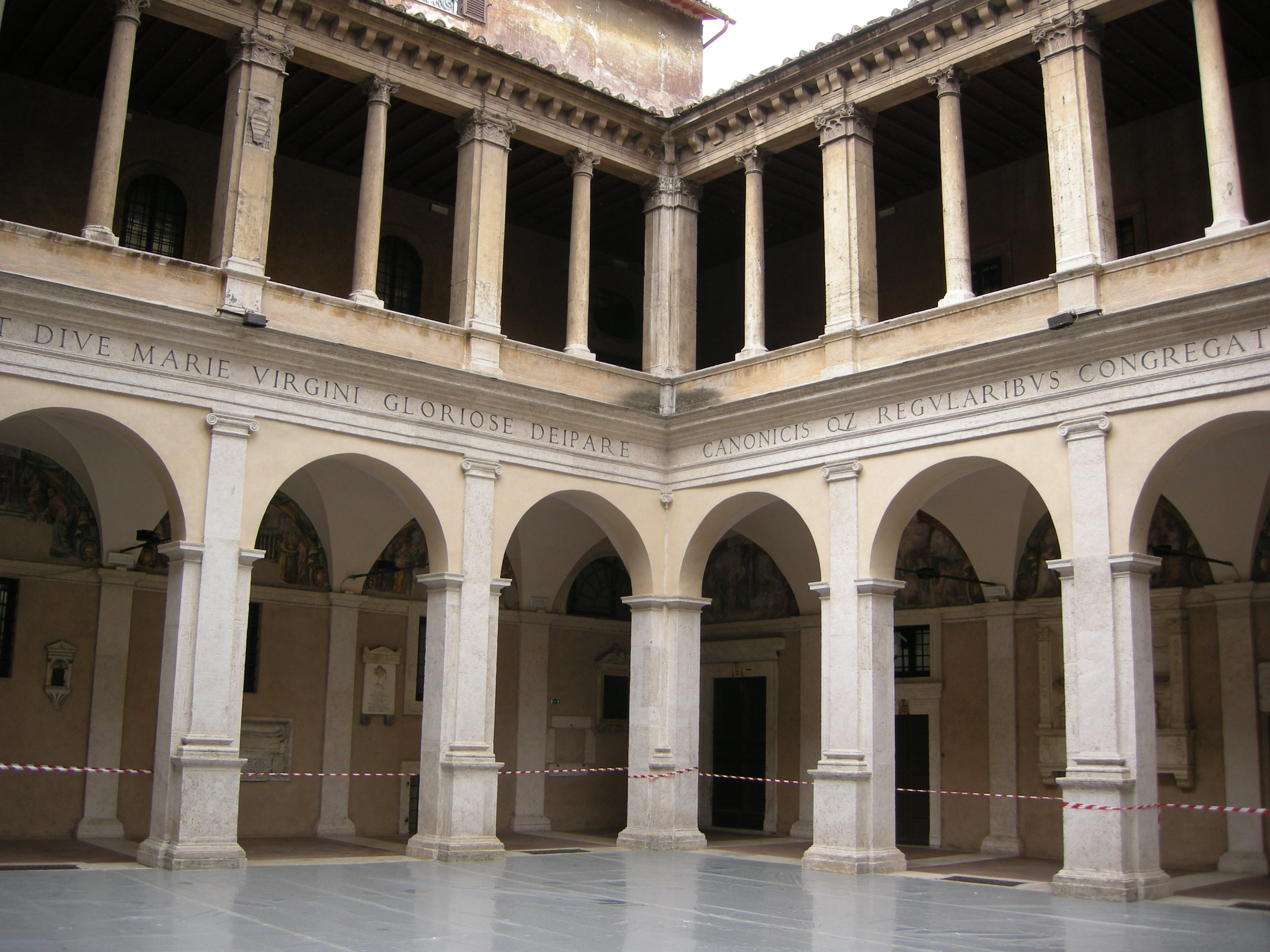 Now, at the Bramante Cloister inside Santa Maria della Pace Church in Rome, you can see eighty of Tissot’s works all at once.  Paintings, etchings and illustrations loaned by the Tate in London and the Petit Palais and the Musée d’Orsay in Paris, as well as by other museums and private collections around the world, went on view September 26, 2015 and will remain until February 21, 2016.

It is the first time ever that the public has had the opportunity to view a major Tissot retrospective in Italy.

The exhibition, curated by Cyrille Sciama, head of the 19th century collection at the Musée des beaux-arts, Nantes, France, is organized into eight themed sections that form a chronology of Tissot’s life and career.

I’ve created the following virtual tour for those of us who cannot make it to Rome:

The beginnings in Paris

Jacques Joseph Tissot left home in Nantes to study art in Paris at age 19, in 1856 (i.e before he turned 20 that October).

Within three years of his arrival in Paris, Tissot was ready to exhibit his work at the Salon, the huge government-administered annual art market showcasing the glory of France.  Each spring, the Salon provided a six-week spectacle for the hundreds of thousands of visitors from throughout Europe and Great Britain who flocked past the floor-to-ceiling rows of paintings.

The Salon was an art competition as well as the social event of the year.  Artists struggling to build a reputation – and make money – chose conventional mythological, historical or religious subjects.  Competing with established artists, the 23-year-old Jacques Joseph Tissot — likely borrowing the name from his American friend James Whistler — submitted his paintings to the jury under the name James Tissot.

At the Salon in 1863, Tissot exhibited three pictures including The Return of the Prodigal Son (1862).

In 1865, Tissot exhibited two paintings, Tentative d’enlèvement (The Attempted Abduction, on loan by the Musée des beaux-arts, Nantes) and Spring (loaned by a private collector), at the Salon.  The Attempted Abduction, another of Tissot’s medieval pictures, disappointed the critics.  Spring, however, received some praise because of its similarities to British artist J.E. Millais’ Apple Blossoms (Spring), exhibited at London’s Royal Academy in 1859.

Tissot’s Self portrait (1865) is on loan from the Fine Arts Museums of San Francisco, California.

Tissot was using his ever-increasing wealth to amass what would become a renowned collection of Oriental art.  His new-found fascination initially influenced only a few of his paintings:  The Japanese Bather (c. 1864, about seven by four feet, or 208 by 124 cm, on loan by the Musée des beaux-arts, Dijon, France).

Unlike his friend James Whistler, Tissot did not show his “Japanese” paintings at the Paris Salon, but he recorded them in the photograph album of the paintings he sold. 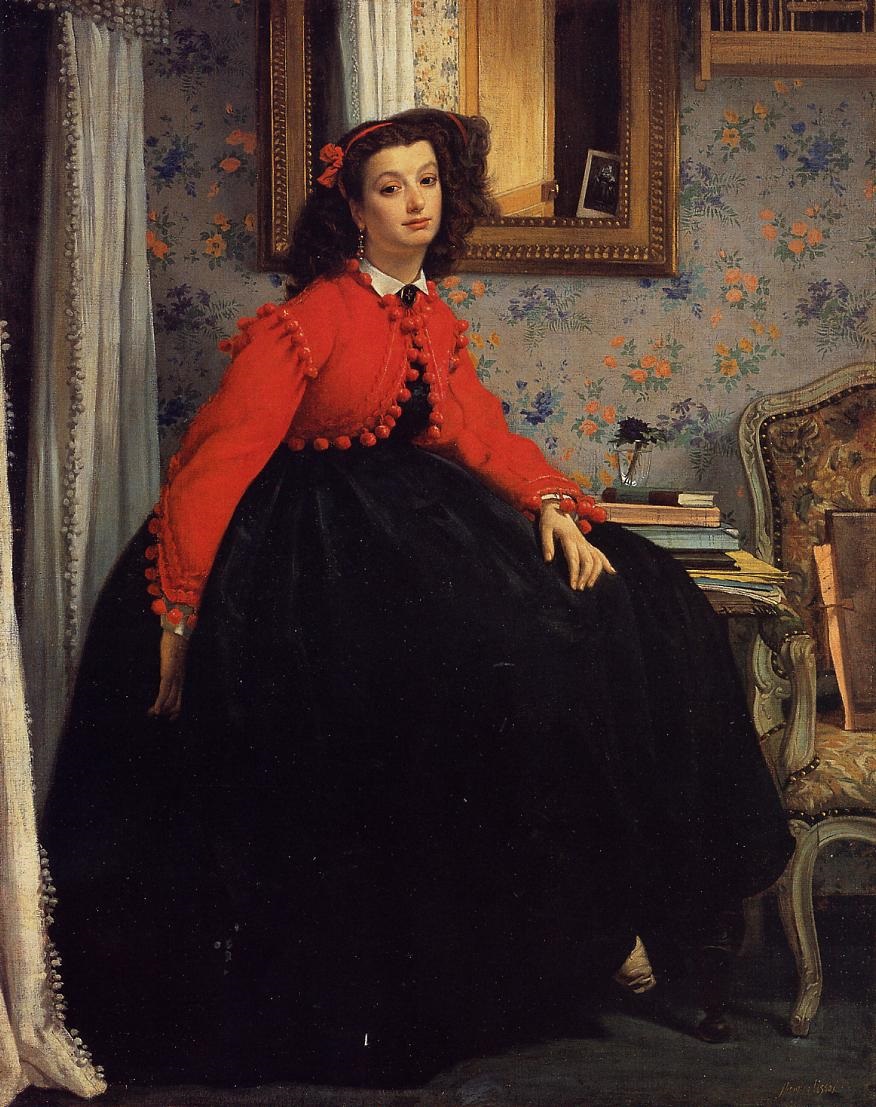 Tissot exhibited Portrait of Mlle. L.L. [as well as Two Sisters] at the Salon in 1864 – reflecting the trend toward capturing “modernity,” and he began to hit his stride as an artist.

The small, popular picture of Captain Frederick Gustavus Burnaby (1870) bursts with life; I saw it at the Metropolitan Museum of Art in New York when it was included in the blockbuster exhibition, Impressionism, Fashion & Modernity, in the spring of 2013.  Burnaby was a larger-than-life character whom Tissot knew through a London friend.

A painter of London

Tissot moved to London in 1871, following the Franco-Prussian War and its bloody aftermath, the Paris Commune.

At the Royal Academy in 1873. he exhibited The Captain’s Daughter (on loan by the Southampton City Art Gallery, U.K.) and Too Early (lent by the Guildhall Art Gallery, London).

A Portrait (1876) was exhibited by Tissot at the new Grosvenor Gallery, London, from May to June 1877 and is on loan from the Tate.  It often is called Portrait of Miss Lloyd because Tissot made a print after it, and though it was a variation on the painting, the model for the print was identified at an auction in 1903 as Miss Lloyd.

The ideal face of Kathleen Newton

For six years, Tissot shared his home at 17 (now 44) Grove End Road, St. John’s Wood, in north London with his mistress and muse, Kathleen Irene Ashburnham Kelly Newton (1854 – 1882).  A divorcée with a young daughter and son, Mrs. Newton died of tuberculosis at age 28.

The Warrior’s Daughter (A Convalescent) (c. 1878), for which Kathleen Newton modeled, is on loan from the Manchester Art Gallery, U.K.

The Prodigal Son in Modern Life

Upon his death, Tissot left a series of four oil paintings to the Louvre. These scenes from The Prodigal Son in Modern Life (1880) included Le depart (The Departure), En pays étranger (In Foreign Climes), Le Retour (The Return), and Le veau gras (The Fatted Calf).

The Inner Journey and the Departure

The Widower (1876), set in Tissot’s garden in St. John’s Wood, London, is on loan from the Art Gallery of New South Wales in Sydney, Australia.

James Tissot, the Painter of Fashion

Immediately after James Tissot’s mistress and muse Kathleen Newton died of tuberculosis in November, 1882, he abandoned his St. John’s Wood home and moved back to Paris.  During his eleven years in London, he had declined Edgar Degas’ invitation to show his work with the artists who became known as the Impressionists.

Tissot exerted himself to re-establish his reputation in Paris with a series of fifteen large-scale pictures called La Femme à Paris (The Parisian Woman).  Painted between 1883 and 1885, they portrayed the fashionable parisienne in various incarnations using brighter, modern colors than he had in his previous work.

When Tissot’s La Femme à Paris pictures were exhibited at the Galerie Sedelmeyer, Paris, in 1885, and at Arthur Tooth and Sons, London, in 1886, the series was poorly received.  Six of the paintings are now in public collections.

Visiting The Artist’s Ladies at the Chrysler.

Les Femmes d’artiste (Painters and their Wives) (1885, also called The Artists’ Wives or The Artist’s Ladies) depicts a gathering of artists and their wives on Varnishing Day, before the official opening of the Salon in Paris at the Palais de l’Industrie.  The picture is on loan by the Chrysler Museum of Art in Norfolk, Virginia.

Alone at the end of the exhibition is Tissot’s The Most Beautiful Woman in Paris (La plus jolie femme de Paris, 1883-85).  The painting (oil on canvas, 146.32 by 101.6 cm, on loan from the Musée d’art et d’histoire in Geneva, Switzerland) is protected by a glass box, “as if it were the Mona Lisa,” according to one critic, in a small lounge hung with mirrors and crystal chandeliers.

Error: Twitter did not respond. Please wait a few minutes and refresh this page.