James Tissot fought with the National Guard to defend Paris from the Prussian troops during the months of the Siege through the armistice on January 28, 1871.  Unlike Manet, Degas, and the other artists who later would be known as Impressionists, and the 300,000 residents who had left Paris by mid-April, Tissot was in Paris during The Bloody Week – la semaine sanglante.

After the Prussian victory, many Parisians, particularly the working class, felt betrayed by the new French government for its humiliating concessions to the Germans after the war, its disregard of the suffering of Parisians, and its imposition of inhumane financial pressures on the starving, impoverished survivors.

Out of anger and desperation, the Commune was formed on March 19, as a republic  to govern Paris.  The new French government established itself at Versailles on March 20.

The Communards installed themselves at the Hôtel de Ville (City Hall) and barricaded Baron Haussmann’s wide, “revolution-proof” streets with enforced assistance from every passing man, woman and child.  The barricade by the Arc de Triomphe, initially constructed in October 1870 as a defense against the Prussian troops, now was nearly thirty feet high. 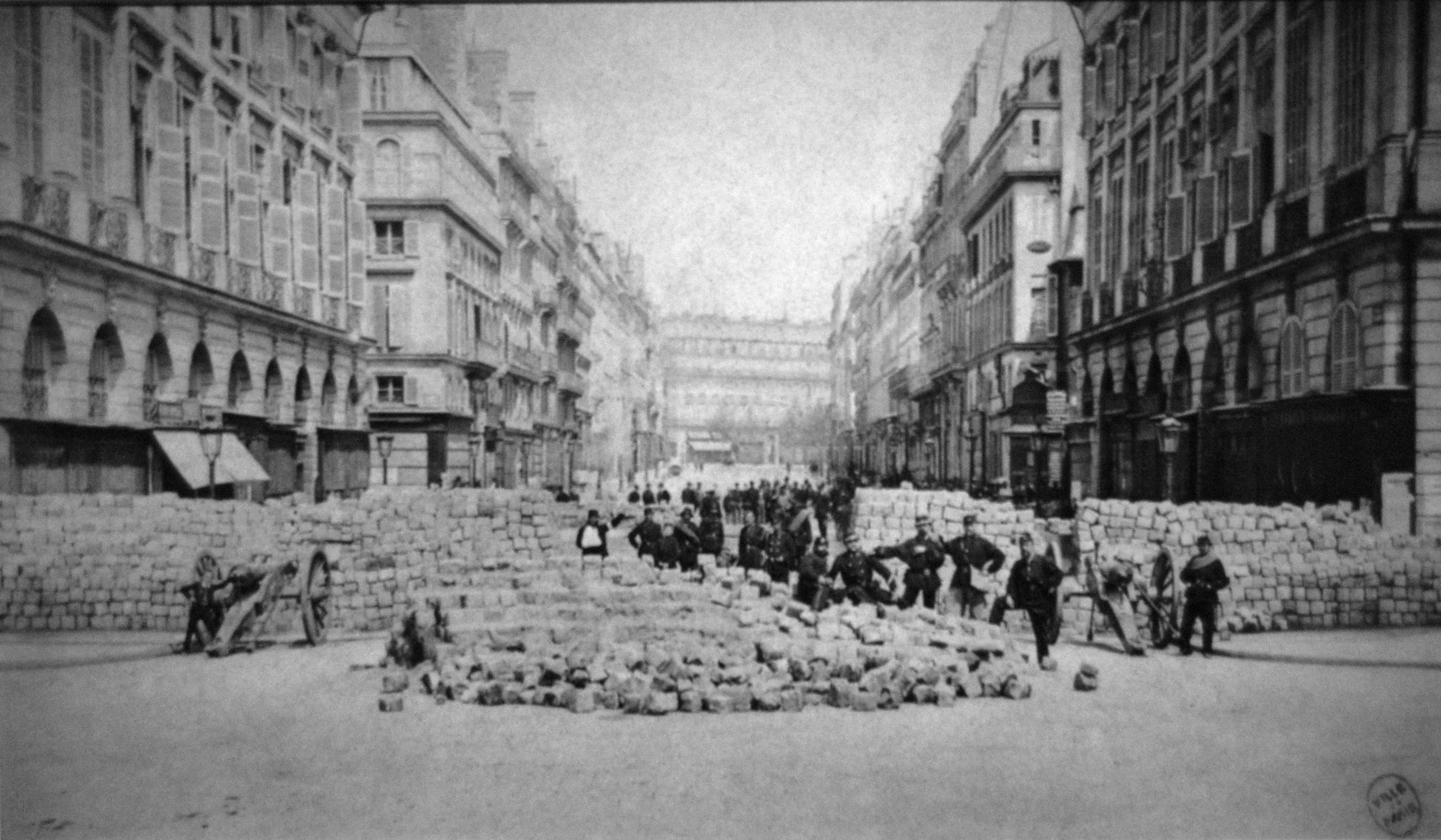 Barricade at the rue de Rivoli during the Paris Commune, 1871 (Photo: Wikimedia.org) Barricade at the corner of boulevard Voltaire and Richard-Lenoir during the Commune of Paris of 1871, by Bruno Braquehais (Photo: Wikipedia.org)

On April 2, the French government began to bombard Paris.  Two days later, the Communards arrested the Archbishop of Paris and ten monks and imprisoned them as hostages.

By the end of April, Paris was almost surrounded by the better-equipped French army, which stepped up its bombardment of the city on May 1.  On Sunday, May 21, the Versailles troops poured through the unguarded Porte de Saint-Cloud in the ring of fortifications around the capital – less than three miles south of Tissot’s villa near the Porte Dauphine.  As the soldiers battled their way into the city, they arrested anyone suspected of being a Communard and shot anyone at a barricade.  Others were taken prisoner – or shot on sight.  Paris became a bloodbath as the French government massacred its citizens to suppress the Commune.

By 9 p.m. on Tuesday, May 23, the Tuileries Palace – formerly the residence of Napoléon III – was ablaze.  An eyewitness wrote, “The immense column of fire went up into the sky, as straight as an arrow.”  The Tuileries burned the whole next day and night.  A wing of the Louvre – the library, housing 100,000 books — also went up in flames.

By the early hours of Wednesday, May 24, the Hôtel de Ville (City Hall) was on fire.  By 9 p.m., the Prefecture of Police was burning.  It had not rained for weeks, and the flames spread to the Palais de Justice and the Palais Royal.  Heavy winds carried the flames to the splendid residences along the rue de Rivoli and half of the rue Royale.  The Audit Office, where Berthe Morisot’s father worked, also burned down.  At the time, the French government blamed the Communards for arson; recent scholarship argues that this was propaganda to galvanize loyalist forces.  With the exception of the Hôtel de Ville, set on fire by the retreating Communards, government buildings caught on fire by street fighting and incendiary shells.

The Burning of the Hôtel de Ville, May 24, 1871. Engraving by Theodor Hoffbauer. (Wikimedia.org)

On Thursday, May 25, the Grenier d’Abondance burned down.  This storehouse for four months’ supply of grain, flour, corn and sugar for the inhabitants of Paris had stood on the Boulevard Bourdon near the Place de la Bastille since 1816.  Montmartre was destroyed, and on the Left bank of the Seine, part of the Gobelins factory burned down.  All the tapestry and looms of the great workshops were reduced to ash.

Berthe Morisot had been staying with her married sister, Edma, in Cherbourg on the English Channel, since early May.  But her mother wrote to her from Saint-Germain-en-Laye, west of Paris:

“Paris is on fire.  It is unimaginable.  Half-burned papers, some of them still readable, have been carried here all day long by the wind.  A vast column of smoke covers the city, which at night is a red, luminous spot, horrible to look at, like a volcanic eruption.”  Resentful that Edgar Degas sympathized (from afar) with the Communards, she added, “If Monsieur Degas could be roasted a little in it, he would have what he deserves.”  Manet also was disgusted with the new French government, calling its monarchist leaders “doddering old fools.”

A heavy rain – the first in several weeks — fell all day on Friday, May 26, extinguishing the fire at the Louvre.

Government troops now occupied the Left Bank.  They piled up Communard corpses in the streets, and the carnage continued.  By Saturday, May 27, the Communards had executed 92 of their prisoners.  At dawn on Sunday, May 28, the last organized Communards – 147 of them – were lined up with their backs against a wall at Père Lachaise Cemetery and executed.  The sun broke out that day, and around noon, the French government declared that Paris had been saved:  “Order, labour, security will be reborn.”  By 4:00 p.m., government troops marched thousands of Communards (and suspected Communards) tied together with rope along the boulevards of the city, west to Versailles.  The prisoners were former soldiers in uniform, some in the tunics of the National Guard, deserters, civilians, women of all classes – some in silk gowns and some dressed as men – and even boys of 14 or 15.

Prisoners of the Versailles government (Wikimedia.org)

The French government massacred thousands in retribution; the total is estimated at 20,000.  Corpses were everywhere, and the stench of decomposing bodies was overwhelming.

By Wednesday, May 31, residents displayed the tricolor at their homes and even on their carriages, to forestall searches by the authorities.  Within the next few weeks, Parisians who had fled after March 18 returned.  Cook’s Tours of London began offering special trips to Paris to see the still-smoking ruins, considered hauntingly beautiful and magnificent.  Photographer’s images of the charred remains of the capital appeared in the shop windows, purchased by Parisians and tourists alike. Berthe Morisot’s mother returned to Paris.  “It’s unbelievable,” she wrote, “you rub your eyes, wondering if you are really awake.”  On June 5, 1871, she wrote to Berthe:  “I saw only the Hôtel de Ville on the morrow of my arrival.  It’s a beautiful ruin.  Your father wants to have the debris preserved as historical evidence and as a sacred reminder of the horror of popular revolutions.”  She added that their son, Tiburce (a lieutenant in the Versailles army who had been captured, imprisoned in Germany and just released), encountered two Communards – Manet and Degas!  “Even now, they blame the authorities for having resorted to energetic means of repression.  I think they are insane.  What do you think?” Gustave Courbet, not quite 52, was arrested on June 7, 1871.  On September 6, 1870, Courbet had been designated president of the Art Commission charged with the protection of works of art in Paris and its outlying districts.  After the war and the armistice, Courbet was as bitter against the new French government as other Parisians, but he saw an opportunity to reform the arts and the annual Salon.  He was elected to the Commune on April 16 to work toward this end, and he happily spent twelve hours a day in committee meetings.  “I am in heaven,” he wrote to his parents at Ornans on April 30.  “Paris is a true paradise; no police, no nonsense, no oppression of any kind, no disputes.  Paris runs by itself as if on wheels. It should always be like this.”   He added, “The Commune of Paris is more successful than any other form of government has ever been.”  Now, just five weeks later, he was being taken to Versailles to be court-martialed for his involvement in the Commune and the destruction of government property.

Édouard Manet, who had left Paris on February 12, 1871 for Oloron-Sainte-Marie to be reunited with his wife, Suzanne, his mother and his 19-year-old godson, Léon Leenhoff, was now with them at villa in Arcachon, a seaside resort in southern France.  On March 2, Manet’s brother, Gustave, urged him not to return to Paris, as “the state of the sanitation in the city is far from reassuring.”  A few days after the Commune was established, Manet wrote to a friend, “I’m not looking forward to the return to Paris at all.”

When Manet did return, in early June, he found that his studio in the rue Guyot had been destroyed during Bloody Week, but he was able to rescue his paintings there as well as those he had left in a friend’s cellar.  He moved them to a new studio on the ground floor of 51, Rue de Saint-Pétersbourg, next door to his mother’s apartment.

On June 10, Manet wrote to Berthe Morisot that he was glad that her family’s house in Paris had been spared.  “I hope, Mademoiselle,that you will not stay a long time in Cherbourg.  Everybody is returning to Paris; besides, it’s impossible to live anywhere else.”

In some of the only good news from this time – good for Berthe Morisot, still so attracted to Édouard Manet – Berthe’s mother wrote to her that Suzanne had grown fat and “Mademoiselle Gonzalès [his attractive young student] has grown ugly.”

Edgar Degas had been in Paris through February and early march, but in mid-March, accepted an invitation to stay with friends in Normandy, where he sketched, rested and ate very well.  By May, he was making studies of horses and painting portraits of his friends’ children.

Tissot, unlike his friends Manet and Degas, had endured life in Paris throughout the war and the Commune.  Now, he alone did not find it “impossible” to live anywhere else.  There is almost no documentation on his life at this time.  Exactly when and why James Tissot fled, and whether he had a choice, we may never know.