While James Tissot is hardly a household name, his work is popular all over the world and can be found in some unexpected places. 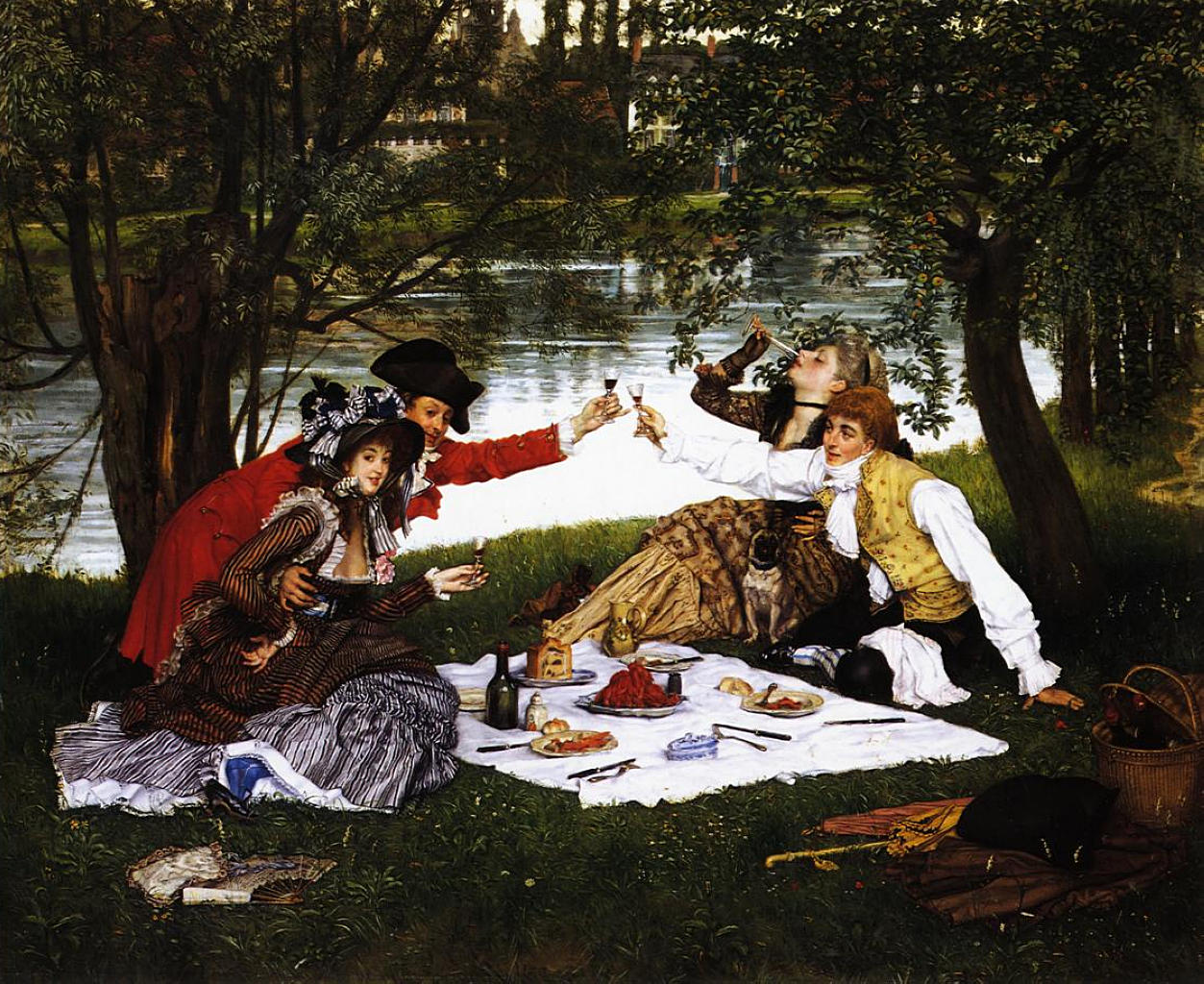 Tissot’s Vive la République! (Un souper sous le Directoire) is similar to Partie Carée/The Foursome, exhibited at the 1870 Salon, in which he depicts a gentleman on the left grasping his date’s right breast, while the woman across from them downs a glass of champagne at the side of another delighted young man.

In Vive la République!, there are three couples, including the fondling gentleman

and his date on the left and the champagne-drinking woman on the right, and the two men with their hands free are toasting over an outdoor luncheon table shaded by a dome-shaped wooden trellis.  A pug dog looks out from under the table.

While working in Paris in the late 1860s, Tissot painted a series of nine 18th century scenes, set in the French Directory period (1795 to 1799).  A few of these pictures were sexually suggestive, but in this quaint setting,  they did not offend contemporary morals.  Tissot’s  Vive la République!, c. 1870, is possibly a sly reference to the new republican government declared in France on September 4, 1870, after Napoléon III’s surrender to the Prussians.  This celebratory scene made its way to India, where it is now in the collection of the Baroda Museum and Picture Gallery in Vadodara, Gujarat. The museum – which resembles London’s Victoria and Albert Museum – was founded in 1887 by the Maharaja of what was then Baroda State (Sayajirao Gaekwad III, 1863 – 1939), for the education of his subjects.

Construction of the picture gallery, a separate building, began in 1908, but it was opened in 1921 because of delays bringing art from Europe during World War I.

The interiors and exteriors of both buildings were scheduled for major restoration in 2012, as the city of Vadodara prepared to celebrate the 150th anniversary of the birth of Sayajirao Gaekwad III.

One of the most dazzling exhibits at the 1867 Paris International Exposition was the Japanese Pavilion, and it received more visitors than any other exhibit.  This was the first World’s Fair in which Japan participated. The Japanese Imperial Commission to the Exposition was led by fourteen-year-old Prince Tokugawa Akitake (1853-1910), a younger brother of the man who would be the last Shogun under Japan’s feudal regime.

The delegation arrived in Paris in March, 1867, and one year later, James Tissot was appointed gwa-gaku, or drawing master, to Prince Akitake.  (This fact was revealed in December, 1979, at the International Symposium in Tokyo.)

Prince Akitake made several visits to Tissot’s studio over the course of the seven- or eight-month appointment, and Tissot painted his portrait in water-color mounted on a hanging scroll on September 27, 1868.  Now at the Historical Museum of the Tokugawa Family, Mito, Japan, it wasn’t until about 1968 that the painter of this picture was identified, by a Japanese scholar, as James Tissot.  To see it, click here.

An interesting story (c. 1872), entered the collection of the National Gallery of Victoria, Melbourne, Australia with the Felton Bequest in 1938.

In Paris, Tissot had painted a series of pictures set in the French Directoire period, 1795-99.

After he fled to London in mid-1871, he adapted his setting to suit English tastes, modeling his 18th century style pictures on portraits by Sir Joshua Reynolds (1723 – 1792), a co-founder of the Royal Academy.

In An interesting story, he showcased his expertise painting ship’s rigging – using the Thames as the background to make his art relevant to  British patrons – while offering his own brand of humor.  Those poor women!  Their patient  suffering surely transcends cultures.

The Widower (1876) was set in Tissot’s garden in St. John’s Wood, London.  The painting belonged to J.P. Davis by 1877 and to John H. Downes by 1888.  By 1939, it was in the possession of Sir Colin and Lady Morna Anderson, who gifted it to the Art Gallery of New South Wales in Sydney, Australia.  Included in the exhibition, “James Tissot: Victorian Life / Modern Love,” The Widower was on display at the Yale Center for British Art in New Haven, Connecticut in the fall of 1999, the Musée de Québec in Quebec City during the winter of 1999-2000 and the Albright-Knox Art Gallery in Buffalo, New York in the spring and summer of  2000.  It also has been exhibited many times in Japan and twice at the Auckland Art Gallery Toi o Tāmaki in New Zealand.

Willesden Junction is in northwest London, and was brand-new when Tissot painted it, complete with its rubbish bin.  The West Coast Main Line station was opened at Willesden Junction by the London & North Western Railway in 1866, with trains traveling to Birmingham and Scotland.  The upper level station on the North London Line was opened in 1869 by the North London Railway, which ran trains east-west across Northern London.

The modern woman portrayed in this ultra-modern setting looks at us with a direct, confidence gaze amid her baggage.  It’s a small but fascinating painting, suffused with a delightful ambiguity typical of Tissot.  Who is this woman, and where is she going?  She seems free-spirited, yet she is enclosed in a jumble of cramped spaces.  With his sly and original humor, Tissot signed one of her suitcases with his monogram, J.J.  Her purse clasp bears his monogram as well, but it’s hard to see in a reproduction.  The picture is a tiny Tissot treasure.

Tissot’s Still on Top (c. 1874), is in the collection of the Auckland Art Gallery Toi o Tāmaki  in New Zealand, the gift of British industrialist and politician Viscount Leverhulme (1851 – 1925) in 1921, when it was worth approximately £ 500.  Still on Top depicts two women and an elderly male servant wearing a red liberty cap, a revolutionary symbol in France.  It had only been three years since Tissot had fled Paris – under some suspicion – during the French government’s suppression of the radical Paris Commune.  It’s really rather daring for an apparent French political refugee of the time, remaking his career in England:  as the three figures raise the flags, which is on top?

On the morning of Sunday, August 9, 1998, the slightly larger Still on Top, worth $3.5 million USD, was stolen from the Auckland Art Gallery by a 48-year-old man with a shotgun who then asked $260,000 ransom from the Auckland Art Gallery.  The painting was recovered under a bed at the home the man rented in Waikaretu, south of Port Waikato, on August 17.  Restoration of the picture, which had been terribly damaged, began in February 1999.  [For the full story of the robbery –  including surveillance video –  and the repairs to Still on Top, click here.]

The restored work was unveiled at the gallery on July 12, 2001 at a special exhibition that included Tissot’s Waiting for the Train (Willesden Junction) from New Zealand’s Dunedin Public Art Gallery and The Widower from the Art Gallery of New South Wales in Sydney, Australia.