To cite this article: Paquette, Lucy. Welcome to the Royal Academy Exhibition: London, 1870 (Part I). The Hammock. https://thehammocknovel.wordpress.com/2013/02/11/welcome-to-the-royal-academy-exhibition-london-1870-part-i/. <Date viewed.>

Charles Dickens delivered the speech at the dinner in honor of the 102nd Royal Academy Exhibition in 1870, held for the first time in its new galleries in Burlington House, Piccadilly.  Painter George Dunlop Leslie said it was by far the most eloquent and impressive speech he had ever heard at an Academy banquet:  “It was the last public speech that he delivered, and possibly the finest.”  It was followed by toasts to “The Sovereign,” “The Army and Navy,” and the health of Her Majesty’s Ministers, the officials’ required responses despite their knowledge of art or the patience of their audience, and finally the band of the Royal Artillery in the lecture-room.

Among the paintings crammed from floor to ceiling throughout the galleries were five pictures by the venerable Sir Edwin Landseer, R.A. (1802 – 1873), who had sculpted the lions in Trafalgar Square even as he was slipping into insanity.  One of his paintings, Queen and Prince Albert in the Highlands, already had been shown – unfinished – in 1854 by Royal Command, and Landseer had been repainting it over the past sixteen years, with disastrous results.

John Callcott Horsley, R.A. (1817 –1903) – who had designed the first Christmas card in 1843 – showed The Banker’s Private Room – Negotiating a Loan.  The Saturday Review wrote, “This quiet unobtrusive study of texture, light, shade and color can scarcely be praised too highly.”

Frederick Leighton, R.A. (1830 – 1896) had only a small picture, A Nile Woman, because an illness had prevented him from completing his large painting called Hercules Struggling with Death for the Resuscitation of Alcestes.

The self-effacing Arthur Hughes (1832 – 1915), a well-liked man whose paintings – if not rejected – were never advantageously hung at the Royal Academy, had Sir Galahad and Endymion. The Age of Gallantry, by George Henry Boughton (1833 – 1905), was described as “a bit of last-century life treated with elegant humor and set in a pleasing effect of silvery haze.”  Edward Poynter, A.R.A. (1836 – 1919) showed Andromeda and St. George and the Dragon, his drawing for the design of the glass mosaic in the Central Hall at Westminster.

Philip Hermogenes Calderon, R.A. (1833 – 1898) exhibited Virgin’s Bower, Orphans, and Spring Driving Away Winter (the figure of Spring, according to one matter-of-fact reviewer, is an “exuberant, flushed damsel” – a “blooming virgin” – who “pelts” an old woman, representing Winter, with fresh lilacs).

George Adolphus Storey (1834 – 1919) exhibited Only a Rabbit (a picture of hunters returning home with little to show) and A Duet.  William Yeames, A.R.A. (1835 – 1918), a gentleman painter who enjoyed playing tennis and spent holidays south-east of London at Hever Castle, had Maunday Thursday, Visit to the Haunted Chamber and Love’s Young Dream.  George Dunlop Leslie, A.R.A. (1835 – 1921), a favorite of John Ruskin, exhibited Fortunes, in which a group of damsels try to divine their nuptial fortunes by throwing flowers in the water and watching as the flowers sink, stay or float away (meaning the marital fate is as yet unknown).  According to one newspaper critic, this painting features “a gold brunette, with amorous eyes” gazing over the shoulder of another girl, who has a puppy on her lap and who evidently does not desire to know her connubial future.  “It is Mr. Leslie’s best picture,” proclaimed this writer.

Among the younger artists represented at the Royal Academy in 1870 were Val Prinsep (1838 – 1904), who had The Death of Cleopatra, The Dish of Tea and Reading ‘Sir Charles Grandison.’

The Death of Cleopatra, by Val Prinsep

The Dish of Tea, by Val Prinsep

Simeon Solomon (1840 – 1905) exhibited A Youth Relating Tales to Ladies, which the reviewer for the Art Journal found “alarmingly lackadaisical,” sniping that “these ‘tales’ could not have sparkled with wit.”

Some foreigners and numerous women [who were not allowed to attend the annual Royal Academy dinner] provided a bit of diversity in the exhibition.  Mrs. E. M. Ward (Henrietta Mary Ada Ward, 1832 – 1924), “at her best” according to one critic, exhibited The First Interview with the Divorced Empress Josephine with the King of Rome [while her husband, Edward Matthew Ward, R.A. (1816 – 1879) showed The Trial of Baxter, of ‘The Saint’s Everlasting Rest’ by Judge Jeffreys].  Miss Maria Spartali (1844 – 1927), a student of Ford Madox Brown (1821 – 1893), exhibited, along with his daughters:  Miss Catherine Madox Brown (1850 – 1927) with Thinking and Miss Lucy Madox Brown (1843-1894; she would marry English writer and critic William Michael Rossetti in 1874) with A Duet.  Miss Louise Romer (1843 – 1933), a determined 27-year-old painter just back from four years in Paris with her ne’er-do-well husband, Frank, submitted a three-quarters portrait of herself carrying a pot of azaleas that she called Bud and Bloom, which was rejected by the Hanging Committee.  Her painting Consolation also was rejected, but she persevered; Frank had served as secretary to Baron Nathaniel de Rothschild, and he had been sacked for gambling.  It was the Baroness de Rothschild who had encouraged Louise to pursue a career in art.

Although many established British artists were of foreign ancestry or birth, “foreigners” in this Royal Academy exhibition included a number of French painters, such as Jean-Léon Gérôme (1824 – 1904), who displayed Jerusalem – and his lurid scene of Parisian violence in a controversial execution by firing squad after Napolean’s defeat, The Death of Marshal Ley (also known as December 7, 1815, 9 O’Clock in the Morning).  This picture must have seemed a jarring contrast on a wall filled with English damsels, British legends, genteel humor and sentimental slices of life, serene landscapes, allegories, and noble Classical history and mythology.

Alphonse Legros (1837 – 1911), a Frenchman who moved to England in 1863 and married Miss Frances Rosetta Hodgson (whom Dante Gabriel Rossetti described as a “nice little woman”), had three paintings; Scène de Barricade, Prêtres au Lutrin/ Two Priests at the Organ (now at the Tate Britain as Rehearsing the Service) and another of an old priest praying, Viellard au Prière.  Though a foreigner, Legros was assimilating into the British Establishment as a respected teacher of etching at the South Kensington School of Art.

Nevertheless, the British maintained a skeptical view of the French.  The March 5, 1870 issue of the British weekly journal, The Architect, carried an article, “Forthcoming Pictures at the Royal Academy,” which offered this:  “Mr. Legros has this year chosen for the incident of his principal picture A Barricade, a subject which is dissimilar to those usually selected for illustration by this artist, but with which his nationality has doubtless made him familiar.” 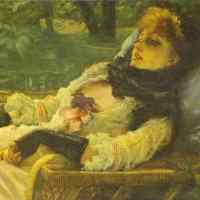 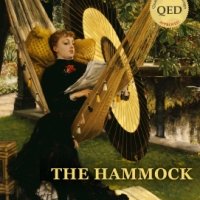 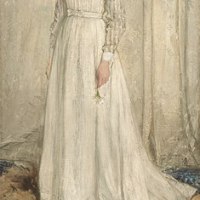 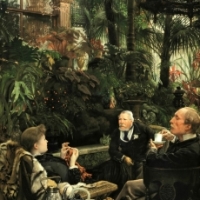